Skip to content
E Mail Request for help from a Scottish Green
Hi, I’m Les Wallace a Scottish Green Party member and I have been campaigning heavily for a cessation for driven grouse shooting. Natalie Bennett has also stressed how damaging this activity is and called for its end, it’s certainly a VERY relevant topic for the north of England. Could your local groups members please read this article and support the petition and if possible spread the word! Thank you.
https://markavery.info/2018/09/27/guest-blog-driven-grouse-shooting-your-bluffs-been-called-by-les-wallace/
Letter to the Hexham Courant

This week three men became the first anti-fracking campaigners to be jailed after peaceful protests which blocked a convoy of Cuadrilla trucks at Preston New Road in Blackpool. Like the local protesters attempting to save Druridge Bay in Northumberland and Pont Valley in County Durham, these men were acting on deeply held concern about climate change backed by scientific evidence. On behalf of a community let down by a government which is prepared to change planning laws in order to fast track shale gas extraction, they put themselves on the line.  Previously protesters have been given community orders or  fines, this escalation of punishment is chilling for anyone taking part in legitimate and peaceful protest.

Communities and their local authorities have repeatedly expressed opposition to fracking but have been overruled by a government which, in its efforts to deliver an equally disastrous Brexit, constantly refers to “the will of the people”. Clearly the peoples will only matters when it agrees with their own ideology. Fracking is dangerous, dirty and climate changing and communities are right to protest. Something is surely wrong when those who attempt to oppose climate chaos are punished so severely while those who care only for quick profit are rewarded.

In Memory of Lesley MacDonald 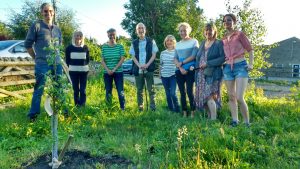 Tynedale Greens celebrate the life of one of the branches longest serving members – Lesley MacDonald by planting an apple tree in the community orchard in her home town. Lesley was an active member of Tynedale Green Party and, as Minutes Secretary, rightly and assertively insisted on clarity from mumbling members and Chairs, before committing anything to paper. Lesley attended as many meetings as her frequent travels and theatrical commitments allowed and could be relied on for honest, fair and clear-eyed commentary. She was also a very warm and fun-loving woman – verging on mischievous at times – and will be very much missed by everyone who knew her and had the pleasure of working with her in Tynedale Green Party.

Northumberland County Council has proposed three options for changes to schooling in the west of the county, all of which would result in the closure of multiple schools. Tynedale Green Party considers none of these options to be acceptable; we strongly oppose these plans.

Every child has the right to a high-quality education in their own local area, decisions about education should never put money ahead of the needs of children. Schools in rural areas face unique challenges, but if the Conservative-run council thinks that school closures are the answer to these challenges then they do not understand the needs of our communities or our young people.

The challenges faced by schools in West Northumberland are a direct result of austerity imposed by this Conservative government. This has been exacerbated by the fragmentation of our education system into academies and multi-academy trusts, introduced by Labour and expanded by the Conservatives.

Our Conservative MP Guy Opperman has expressed his opposition to the plans. However, given his consistent support for academisation, that it is his party who control the council and his party who have slashed spending on public services it is hard to see how he can make such opposition with a straight-face. His National Funding Formula, which does not take into account the sparse nature of West Northumberland schools and potential increased journey times is not necessarily fit for this particular region.

We all know that services in rural areas are rarely as ‘cost-effective’ as those in cities, but that doesn’t mean that people in the country should have to settle for sub-standard provision. A government that cared for the needs of all its citizens would invest more heavily in rural areas to ensure equity for all. A truly local school is a hub of small village life and crucial in keeping or attracting the young families who make rural communities viable in the long term.

Tynedale Green Party offers them our full support, we encourage parents and concerned residents to become more involved in their local schools an all schools to work together. We urge Northumberland County Council to think again.

Please note that tonight’s business meeting has been cancelled due to the recent spell of bad weather. The meeting will now take place on the 9th March at 7.0 pm.

Will you help out on Saturday 3rd March to elect a strong Green voice for Beacon & Bents?

Beacon and Bents Green Party are campaigning hard to get a David Francis elected onto South Tyneside Council at the May elections.  The feedback we are getting on the doorstep is very positive, and residents are fed up of a Labour ‘single party state’.

As a Party, we’ve got Greens in council chambers across the country making a huge difference in their communities.  But not a single Green councillor in South Tyneside.  Just one Green voice can transform the culture of a Council.

The stakes are so high this year as we campaign to elect David Francis as our strong Green voice here.  But with just 2 months to go until election day, we need to speak to every single voter.

Together, we can avoid electing just another Labour Councillor.