As you know, we are not standing a candidate in the forthcoming Hexham East by-election. Several members have therefore asked if they can instead support Lee and OpenHexham in their campaign for the recently-vacated council seat. Lee requests that anyone who would like to help contact him directly at LeeWilliscroftFerris@gmail.com – and has also asked me to share the following:

outcome of this election is crucial given the context, both locally and nationally. Since being elected as an OpenHexham Independent town councillor in May, we have declared a climate and biodiversity emergency and measure every decision we make against its potential impact on the environment. In addition, I’m proud to part of organising the inaugural Hexham Sustainability Fair at the Abbey on 19th December. One of my key policies currently being communicating to voters, both on leaflets and via other channels such as HexhamTV, is a commitment to climate-proofing every single decision I make as a County Councillor. The climate crisis can be best summarised as a thread running through all my work. I see this as an existential commitment. I know the Green Party is all about bringing democracy as close to the people as possible and I’m proud to be only candidate in this by-election that actually lives in Hexham East. This matters to me. The fact that the outcome of the by-election will directly affect me as a local resident makes me work even harder to win each and every vote. I would be humbled to receive the support of TGP members in the form of leaflet delivery and possibly bannering and door-knocking. I am acquainted with the tenacity of TGP activists and would be delighted to have their practical support.

CONGRATULATIONS to Nick Morphet Tynedales first Green County Councillor following a well thought out campaign and to Martin Swinbank for winning the Alnwick seat. With 2 green Councillors on Northumberland County Council we can now start to influence policy.

May 6th is election day and, we hope, the day Nick Morphet is elected to Northumberland County Council. He’s in with a very real chance – but we need to sustain the intensity Nick and his team have applied to the campaign so far.

Can you help out by acting as a ‘teller’ on election day? A teller is someone who attends a polling station and collects voter information (usually just a name or their voter number) so that we can identify supporters who have not yet voted; we can then encourage or help them to get out and do so. We need as many people as possible so that we can cover the 9 polling stations in the Humshaugh ward from 7am on the day. This election could be won and lost on the narrowest of margins and so getting everyone out to vote for Nick is really important. Click here to request further details. 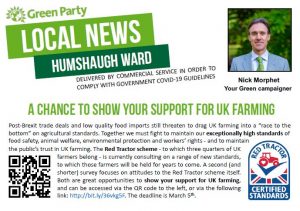 Click to read more of Nicks latest newsletter or if you would like to donate to nicks new fundraiser click here . The more we raise the more effective Nicks campaign will be and the greater his chance of being elected.

In late January, the government threw a spanner in the works of Nick’s county council election campaign by deciding that campaign literature could no longer be delivered by unpaid volunteers. It can still be delivered by post or by paid staff, but the effect is to raise the cost of delivering campaign literature 14-fold (from 4.5p per item to 62.5p per item). This decision clearly benefits the larger parties, who are not only wealthier but more likely to hold power in safe seats where they know they will win by default if campaigning stops. The government’s decision is therefore a serious threat to democracy, and we must do everything that we can to avoid Nick’s election campaign grinding to a halt. We will probably have to limit distribution of the February newsletter to the 750 people who voted in the last local elections. Considering how much effort Nick has put into creating the newsletter, this is a very disappointing decision to have to make! If we can raise £650 in the next week, however, we’ll be able to deliver the newsletter to all 1,900 houses in the Humshaugh ward. Please consider donating to Nick’s campaign fund if you can afford to, would like Northumberland County Council to have a Green councillor, and would like to confront this assault on our democracy.

This link will take you straight to Nick’s campaign fundraiser:

Thank you very much indeed. Your support is hugely appreciated.